Open my heart and you will see engraved inside of it, ‘Italy’.” – Robert Browning

When people ask me about my time in Italy, it’s hard to know which part to share. I lived so many lives in those ten years, and the decade shuffled my priorities and shifted my world perspective. Like alchemy, I went in as a stressed-out corporate lawyer, but I left floating like a reed on the water. I didn’t care about proving myself to anyone. I had proven myself to myself.

My first stint lasted two years in the birthplace of the Rennaissance, Florence. I was working remotely as a lawyer for my Colorado law firm, and I traveled around Europe from there, covering more than 20 countries in two years. I did some freelance work for travel publications, writing hotel and restaurant reviews. I made friends with some fantastic people, including a group that included the Ferragamo twins, and I celebrated the twins’ birthday at their country house, Il Borro. 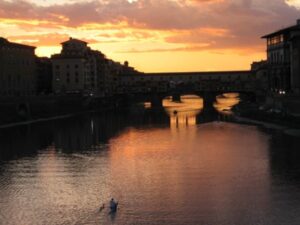 Still, I always had a group of ex-pat friends in rotation as some left and others arrived. That’s the life of an ex-pat–you are always saying a lot of goodbyes. But there are a lot of hellos too. Many ex-pats studied art and painting, and I worked as a volunteer portrait model for a while—which was incredibly dull but a once-in-a-lifetime experience.

I saw myself as a writer all my life, but after graduating from university with a Journalism degree, I opted for law school because I was afraid I would live as a starving writer. But living abroad inspired me to write again, so I began contributing to The American magazine, a new publication at the time, named after the original Dolce Vita-era version and recreated by its founder’s son, a former Washington Post journalist. I continued to work for the Colorado firm, but I began telling people I was a writer instead of a lawyer, and opportunities popped up for me. An American businessman hired me to ghostwrite a book for him. I started acting as a stringer to Us Weekly and covered celebrity goings-on in Italy.

While working with them, I traveled to Lake Como and stayed near George Clooney’s home. I met Don Johnson and Don Cheadle, and I even received a birthday drink and chat from none other than the late, great Bernie Mac. In Rome, I walked the Piazza del Popolo next to George Clooney and his then-girlfriend, and in Sicily, I watched Catherine Zeta-Jones and Brad Pitt film a scene outside Scopello. All the while, I was one of the few English-speaking journalists who could communicate with the paparazzi–and I reported the events back to the mothership. My Italian was getting pretty good by this point.

After spending several unbelievable ferragostas in Puglia, I decided to move there. I loved the slow pace, the sea culture, and the people who reminded me of those in Iowa where I grew up; everyone was lovely and friendly. Very few people spoke English, so my Italian vastly improved during my time there. I had made a few friends in the area, and they helped me find an apartment – a charming former cantina with an arched stone ceiling and a modern bathroom built into the rock. An American law client hired me to do some marketing abroad, and I was still writing for Italian magazines. Then some locals asked me to teach them English, and I began working with Italian diplomats, business people, and high school students studying for their English certificates.

My friends and I, and later my fidanzato and I, traveled the boot’s heel and covered every mile of the peninsula’s coast. In the summer, we lounged on boats and dined on pesce crudo and rosato. Puglia’s proper Meditteranean diet is my favorite of all the regions, and I would have lived there forever. But, my fidanzato’s company transferred him to Milan, and I went with him.

After a few slow months as a casalinga, I decided to apply to the University of Turin. I studied international intellectual property law in conjunction with the World Intellectual Property Organization in Geneva. My class was a mix of students from developed and developing countries, and the worldview it gave me was priceless.

One of my favorite professors offered me an internship in Rome working with the International Development of Law Organization. The position included an apartment looking out on the Vatican. I became great friends with some of my co-workers – a group of intellectual, worldly, beautiful people, and I fell in love with Rome, even though I had never loved the city as a tourist.

Living there, I understood that the best part of Rome is hidden from tourists. The real Rome vibe was incredible, the history overwhelming, and I felt like I was behind the scenes with the Italians, watching the tourists who would never know the true Rome. When I saw an opening in the Fendi legal department, I applied, and it set my life on a new path; Rome became my home and the city where I lived the longest in my Italian life.

And then there was Sicily, my most recent Italian love. On a trip back to the USA, I met a man whose father had been born in Sicily to the daughter of an infamous bandit, but he had never been there himself and had no desire to go. He asked me to travel there and help him find his family history. This project stretched me intellectually, emotionally, and physically. I found his family in a small hill town near Corleone and introduced him to his aunts, uncles, and cousins over telephone and video. I met a 95-year-old WWII hero who became a dear friend and surrogate grandfather. Finding information about the bandit would prove more difficult, but it increasingly became an obsession for me.

Over the next three years, although I was officially living in America again, I spent summers in Italy, mainly in Sicily. I walked country fields with locals who showed me where the legendary bandit had hidden during his ten-year reign, saw churches with secret passageways for the bandit’s escapes, and translated more books, articles, and videotaped conversations than I can recall. I tackled Palermo’s Archivio di Stato (National Archives) – although Italian journalists discouraged me and said it was impossible to navigate even for them. Amid 100-year-old, yellowed papers wrapped in cardboard and tied with twine, I found the mother lode of historical information on the bandit. I was officially a writer.

THE SEARCH FOR VARSALONA