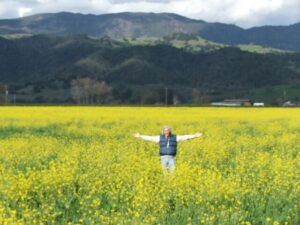 Almost two decades ago, while sitting in what was then the Raven movie theatre in Healdsburg, Scott Palazzo watched as Miles, the wine snob and main character of the movie Sideways, angrily trashed Merlot and refused to drink it. Palazzo’s heart sank. He was finishing his first harvest in Napa Valley – and Merlot made up the lion’s share of the master blend of 400 cases of his Palazzo Proprietary Red. His friends watching the movie with him laughed and teased him, “Way to go, Palazzo, you’re a real visionary!”

Several years earlier, when deciding on varieties, Palazzo adamantly selected Merlot and Cabernet Franc. “Everyone discouraged me and said, ‘You’re in Napa, Cab is king,'” Palazzo said, “I said, ‘No, I’m going to make what I love – a Right Bank Bordeaux Blend.'”

His entry into the winemaking world occurred in Bordeaux in his early twenties, when he worked a few harvests in Saint-Émilion. “It shaped my palate,” Palazzo explained. His passion for wine stemmed from his Italian heritage, growing up around first-generation family members who believed that wine and food should go together.

“Bottom line, wine should complement food. That’s a European concept, and I believe in it wholeheartedly.”

Many years and another career later, his search for a place to create his wine led him to the Carneros Appellation in the Napa Valley. He chose it because the climate is cooler than the valley and more like the climate on the Right Bank region of Bordeaux. Because fruit gets more hangtime due to the environment—four to five weeks longer than the valley floor—Palazzo’s team usually picks around Halloween. This extra time gives the fruit more complexity because it has time to evolve slowly without overripening.

It all begins in the vineyard for Palazzo, and he is hands-on with the decisions made there. The fruit is grown to his specifications and intense attention to detail. “People think winemakers are magicians, but no. Good fruit equals good wine. Great fruit equals great wine.”

The exquisite Carneros fruit starts the ball rolling, but Winemaker Scott Palazzo turns that fruit into nuanced, beautiful wine. These are wines made with power and elegance—not too much oak, not too ripe, floral and feminine, and balanced for pairing with delicious foods. 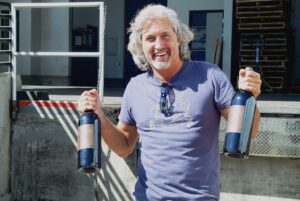 Restauranteurs agree, and hundreds have jumped at the chance to carry Palazzo wine in their restaurants. In the United States, almost 500 restaurants carry Palazzo Wine, and the list is impressive: NOBU, Daniel, Gramercy Tavern, Le Cirque, Michael Mina, Morton’s, and Del Frisco’s, to name just a few.

For the first vintage of Palazzo Wine, Palazzo targeted New York City and California, and in his first market visit to New York, he garnered 45 accounts. And he accomplished it with only one wine – The Right Bank Proprietary Red – a Merlot, Cabernet Franc, and Cabernet Sauvignon blend.

Palazzo recounted how amazed and excited he was at the reaction. “We immediately got a great response from somms and chefs. Then my very first vintage was picked up by The French Laundry, and they’ve carried our wines ever since.” His restaurant list today also includes Napa Valley’s Bouchon, Press Restaurant, Mustards Grill, The Restaurant at Auberge du Soleil, and Farmstead at Long Meadow Ranch.

“People always ask me, ‘How’d you get into all these restaurants?’ And I say, “One at a time.'”

It was never Palazzo’s plan to focus on restaurants out of the gate. He believes it was serendipity. “When they all started saying yes, we went to more restaurants.”

Just three days before its first release, Palazzo was at Press restaurant sharing several bottles of his new wine with friends.  Robert Parker happened to be in the restaurant that night and stopped by the table. When offered a glass, he took a sip and then asked Palazzo to send the wine to him to review. He scored the Right Bank Proprietary Red 94 points in its first vintage, and Palazzo was on the map.

Palazzo laughed, “I had no idea how it would be received. I was proud of it, but I didn’t know! Now we are fortunate, and it is the norm for us to receive 94 to 98+ points, but our restaurant list is still what makes me the proudest.”

Sommeliers and chefs remain stalwart fans of Palazzo’s wines. Word of mouth kept the popularity growing, and Palazzo put the idea of a tasting room and wine club on hold. He was kept too busy introducing his new wine to top restaurants across the country.

“I’m not anti-retail, but doors opened where they opened. I go wherever food and chefs are because when the food matters, my wine is a perfect fit.”

He attributes the success to the fact that the wine pairs so beautifully with food and stands out as a Right Bank blend. The fact that Palazzo himself is an enthusiastic, charismatic salesperson who personally tastes through the wine with the sommeliers at each restaurant—that probably does not hurt either. Of the 500 restaurants currently carrying Palazzo wine, he has been to 495 himself.

“It’s a natural fit. Chefs care about their food first, then your wine. They want wine that complements their food.” Top chefs seem to concur; both Chef Gary Danko of Gary Danko restaurant in San Francisco and Chef Thomas Keller of The French Laundry have supported Palazzo’s wines since day one.

Palazzo gushed, “I can’t tell you how proud I am to make a red wine that Chef Keller pairs with so many different  items on his menu, from Duck Confit, veal chops, quail,  pheasant, to bone-in ribeye.” In Palazzo’s second vintage, Keller chose the Right Bank Proprietary Red as the Holiday Selection on The French Laundry’s menu.

This is a second career for Palazzo, who moved on from his successful music video production business. He was nominated for a Grammy Award for Best Director for his work with the group Oingo Boingo.

Today, Palazzo, along with the help of his wife and partner Angelica, produces 3000 cases per year and still focuses primarily on restaurant placements. He has his hands in every aspect of the business and “does what it takes to consistently make great wines,” just like he did with video production in his music career. This time, it is because his name is on the bottle.